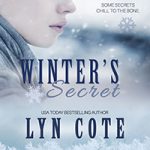 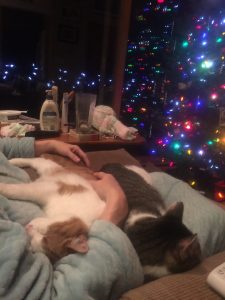 To say that day was a mixed bag is putting it mildly.

February is my birth month (not telling you the year ‘-). The memory of my brithday many years ago when my kids were grade-schoolers always comes back to me around this time of year.

It was a Sunday, a wintry one in Iowa. The day began with the anguished meows of our cat Shadow, a mixed Siamese who was a stray we took in the year before. (I take after my mother who was on the strays’ list of soft touches. ‘-)

Anyway my son had picked her up and she tried to jump down but instead one of her claws had become stuck in his pajama shirt. It actually had pulled the “finger” out of its joint. I unhooked her and she literally writhed on the floor in pain. You can imagine my emotions. Our son was devastated so I didn’t scold him.

I called our vet hoping I could leave him a desperate message. Wonderfully he answered my call. We still had to get dressed and he said he was going to early church and would meet us in an hour at the office. So we dressed and dropped the children off at Sunday School and headed to the vet. Shadow was in terrible pain but in my arms, she suffered in silence.

At the vet’s office, the vet anesthestized her and pulled the ‘finger’ back into place.

But then he couldn’t revive her! I thought, Oh, Lord, please. Our son would be devastated if Shadow died because he picked her up.

The vet worked on her for FORTY-FIVE minutes, doing chest compressions and administering wake-up shots.

FINALLY, she started breathing on her own. The three of us visibly let out a breath of relief.

As you can imagine, I felt as if I’d run a hundred mile race and it was still mid-morning.

We left the vet’s office and started to go to get the children. As we approached a green light. Movement to my right caught my eye and I shouted, “STOP!”

Fortunately my husband didn’t hesitate. A white van sped through the red light and we would have been in a major accident. But we were safe.

Several feet on the other side of the intersection, the van driver realized what he had done and stopped. We drove home without stopping.

What a day for a birthday. I was drained.

The afternoon went quietly with homemade cards from my children and a gift from my husband.

After supper and clean-up, I told my husband that I was going to get into my long flannel winter nightie and when the kids went to bed, I was too.

He gave me a funny look.

About fifteen minutes after I’d sat down in the living room in my nightie, the doorbell rang. I thought, who is at the door after dark on a winter night?

A family in the neighborhood walked in and asked, “Are we the first?” At my husband’s nod, they shouted, “SURPRISE! HAPPY BIRTHDAY!”

TOTAL SHOCK describes my reaction. Before I could get up and run to change. More people crowded in.  “SURPRISE! HAPPY BIRTHDAY!”

I gave up. My husband said, “You can see I really surprised her.”

Everyone laughed including me. After all, I would have been more exposed in my bathing suit than my neck to toe, grannie nightie.

So that was my most memorable birthday! So can you top that? (I sincerely hope not.:-) But this is the Question of the Month and I will be give a free ebook to one commenter. So tell me but PLEASE nothing tragic. My memory had a couple of tense moments but a happy ending. I LOVE HAPPY ENDINGS!! 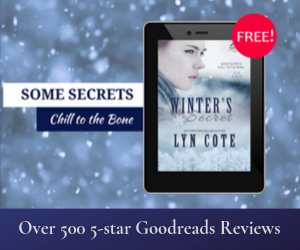 IN CASE YOU HAVEN’T DOWNLOADED IT YET, MY BOOK WINTER’S SECRET IS PERMAFREE. TELL A FRIEND!–LYN
PS: The yellow and white cat above is our present cat. I don’t have any digital photos of Shadow. But she was a beautiful seal point Siamese mix. And much beloved.