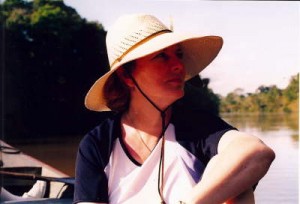 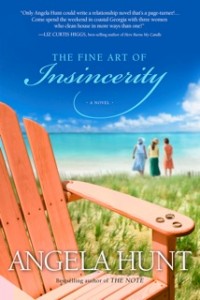 My guest today Author Angela Hunt writes thought-provoking and stories of the unusual. Her photo above is of her floating down the Amazon River while researching her book, The Canopy. Her last series centered on a heroine who ran a funeral parlor. That’s The Fairlawn series So I look for the unusual and insightful when I read an Angela Hunt novel. Here’s the scoop on her latest.

The Fine Art of Insincerity

Three Southern sisters with nine marriages between them — and more looming on the horizon – travel to St. Simons Island to empty their late grandmother’s house. Ginger, the eldest, wonders if she’s the only one who hasn’t inherited what their family calls “the Grandma Gene”— the tendency to enjoy the casualness of courtship more than the intimacy of marriage. Could it be that her sisters are fated to serially marry, just like their seven-times wed grandmother, Lillian Irene Harper Winslow Goldstein Carey James Bobrinski Gordon George? It takes a “girls only” weekend, closing up Grandma’s memory-filled beach cottage for the last time, for the sisters to unpack their family baggage, examine their relationship DNA, and discover the true legacy their much-marrying grandmother left behind.

The Fine Art of Insincerity is a stunning masterpiece. I was pulled into the lives of Ginger, Pennyroyal and Rosemary–sisters touched by tragedy, coping in their own ways. So real, so powerful. Pull out the tissues! This one will make you cry, laugh, and smile. I recommend it highly.  –Traci DePree, author of The Lake Emily series

“Only Angela Hunt could write a relationship novel that’s a page-turner! As one of three sisters, I can promise you this: Ginger, Penny, and Rose Lawrence ring very true indeed. Their flaws and strengths make them different, yet their shared experiences and tender feelings make them family. From one crisis to the next, the Lawrence sisters are pulled apart, then knit back together, taking me right along with them. I worried about Ginger one moment, then Penny, and always Rose—a sure sign of a good novel, engaging both mind and heart. Come spend the weekend in coastal Georgia with three women who clean house in more ways than one!”

THE FINE ART OF INSINCERITY

“You can’t tell your sisters,” my grandmother once told me, “what I’m about to tell you.”

“Of all my grandchildren—” her hands spread as if to encompass a crowd infinitely larger than myself and my two siblings—“you’re my favorite.”

Then her arms enfolded me and I breathed in the scents of Shalimar and talcum powder as my face pressed the crepey softness of her cheek.

My grandmother married seven times, but not until I hit age ten or eleven did I realize that her accomplishment wasn’t necessarily praiseworthy. When Grandmother’s last husband died on her eighty-third birthday, she mentioned the possibility of marrying again, but I put my foot down and told her no more weddings. I suspect my edict suited her fine, because Grandmom always liked flirting better than marrying.

Later, one of the nurses at the home mentioned that my grandmother exhibited a charming personality quirk—“Perpetual Childhood Disorder,”  she called it. PCD, all too common among elderly patients with dementia.

But Grandmother didn’t have dementia, and she had exhibited symptoms of PCD all her life. Though I didn’t know how to describe it in my younger years, I used to consider it a really fine quality.

During the summers when Daddy shipped me and my sisters off to Grandmom’s house, she used to wait until Rose and Penny were absorbed in their games, then she would call me into the blue bedroom upstairs. Sometimes she’d let me sort through the glass beaded “earbobs” in her jewelry box. Sometimes she’d sing to me. Sometimes she’d pull her lace-trimmed hanky from her pocketbook, fold it in half twice, and tell me the story of the well-dressed woman who sat on a bench and fell over backward. Then she’d flip her folded hankie and gleefully lift the woman’s skirt and petticoat, exposing two beribboned legs.

No matter how large her audience, the woman knew how to entertain.

I perched on the edge of the big iron bed and listened to her songs and stories, her earbobs clipped to the tender lobes of my ears, enduring the painful pinch because Grandmother said a woman had to suffer before she could be beautiful. Before I pulled off the torturous earbobs and left the room, she would draw me close and swear that out of all the girls in the world, I was the one she loved most.

Not until years later did I learn that she drew my sisters aside in the same way. I suppose she wanted to make sure we motherless girls knew we were treasured. But in those moments, I always felt truly special.

And for far too long, I believed her.

© 2012 by Angela Hunt, used by permission. Do not reprint without permission. For more information, visit www.angelahuntbooks.com

To view a trailer, narrated by the author, click this link http://youtu.be/nsNku7BuAGM

So are you intrigued? Do you and your sisters or good friends ever go away for a girl’s weekend?