Author Jane Kirkpatrick & the Strength of Family in Shaping Our Lives 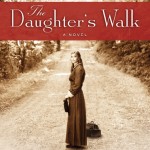 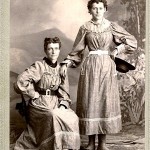 My guest today is Author Jane Kirkpatrick. Jane’s historical novels portray the lives of real American women, bringing their simple historical facts to life. Jane tells us about two strong women in her latest book and then she shares a humorous family story as we celebrate MEGA May. Jane is also contributing a copy of her latest book to the grand MEGA May basket which someone who leaves a comment this month will receive.
Here’s Jane:

“I’d like to add Clara and Helga Estby to the treasure of strong women that Lyn Cote celebrates, especially in May with Mother’s Day in our memories. Clara and her mother, Helga, accepted a wager in 1896 that if they could WALK from Spokane, Washington to New York City within seven months, they’d earn $10,000, enough to save their family farm from foreclosure.

It was a daring thing to do. Times were tough in 1896 with lots of people out of work, defaults on property happening daily. The Estby’s had hit on hard times, too. With eight children at home (two had already died of various diseases) and the father unable to work due to injury, losing the farm would be disastrous. How would they feed the family? So when the wager came up, sponsored by the fashion industry, Helga convinced her daughter to go with her much to the family’s chagrin. Helga also wanted to prove that women were strong, capable of making good decisions and tending for themselves in challenging environments that might include robbers, railroad bums, bad weather, and the demand to walk nearly 25 miles a day if they were to meet their commitment.

They began with five dollars each carrying maps, a compass; each had a pistol. A lantern offered light and Clara carried a curling iron, too. They followed the railroad tracks and when they reached Salt Lake City they had to don the new reform dress that challenged fashion when modesty required that women’s ankles be covered and corsets worn daily.

The women did indeed arrive in New York City — two weeks late. The wager was lost even though the women accomplished the primary task of walking all that distance. What happened when they returned home added to the strength of these women as their family was so shamed by their publically making this trip that they forbade either woman from ever speaking of the walk again. Even more family challenges awaited them with Clara eventually changing her last name and separating herself from the family for more than twenty years.

That Clara, a woman of faith, eventually reconciled, is another part of the tug and pull of mother and daughter relationships and of the strength of family in shaping our lives.

My novel The Daughter’s Walk explores this mother-daughter journey begun May 5, 1896, a big May Month for the Estbys.

My links are as follows: www.jkbooks.com (website) www.janeswordsofencouragement.blogspot.com (blog) www.bodaciousbothedog.blogspot.com (my dog’s blog. He has more followers than I do); www.theauthorjanekirkpatrick.facebook.com and a video link to a book trailer that is on my website http://www.youtube.com/embed/Pt4ZMRfao_c

“When my husband required neck surgery at an out of town medical center, we asked my parents and his parents to look after his sometimes troubling sixteen year old son — and the dogs while we were gone. My mom was a retired nurse and my mother-in-law an evangelist who traveled North America in her youth speaking and healing. She was a natural Biblical Concordance. They were lovely people and all four got on well together.

My mom shared this story with me when we got back a week later.

Apparently, after supper one evening, my mom put a red-trimmed plate down for the dogs to lick clean, something we do all the time. My mother-in-law commented. “I know the kids do that but it just doesn’t seem sanitary to me.”

My mom, the nurse told her that so long as the plates were washed in the dish washer she thought it was likely ok.

She went on about her business picking up dishes and getting dessert ready for serving.

When she looked for the dog-licked plate to put it into the dishwasher, she couldn’t find it. Then she remembered she’d put it on the counter planning to put all the dishes in at one time. She still couldn’t find it on the counter. then she looked at the table and saw that my mother-in-law had apparently thought it a clean plate and was happily eating her pie off the plate with it’s pretty red trim.

“Nothing,” she answered. “Some things are better left unsaid.”

Her diplomacy made me laugh and we laughed together, a harmless secret that can now be said as those both of those lovely women are now at “Home.”–Jane

Thanks so much, Jane. Your latest book reminds that while women have always been strong, in the past they had to contend with many more rules and prejudices. Do any of you have family stories where a woman went around the barriers and succeeded?

And have any of you read any of Jane’s books? Let us know or if you’re going to add this one to her TBR (To Be Read) pile. Thanks, Jane!–Lyn

Lyn Cote welcomes other authors to her "Strong Women, Brave Stories" blog to share stories of women who triumph over the challenges common to all women.
View all posts by Lyn Cote →
This entry was posted in Uncategorized and tagged historical novel. Bookmark the permalink.