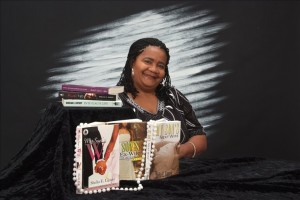 My guest today is Author Shelia E. Lipsey who is going to share her testimony and about a man who found blessings in “little copper creatures.”  Here’s Sheila:

“Stricken with polio at the age of two years old, I was left with not only pencil thin brace-clad legs but also a huge case of low self-esteem. Taunting, teasing and cruel name-calling from the kids at my school and in my neighborhood still manage to vividly interrupt my thoughts. Painfully I recall the stares and glares from curious adults who were worse than little children, gawking at my skinny legs and noticeable limp.

Godly parents who instilled in me a strong reverence for God raised me. “Shelia,” my mother would say tenderly and with a voice full of compassion. “God loves you. He loves you just the way you are.” However, getting me to accept and believe that was a long way off.

Instead of being all, that God designed me to be, I focused on my imperfections and became a woman who did not truly love and accept me for me. I allowed myself to go through years of physical abuse at the hands of low-lifers that only upheld my poor self-image of feeling like a nothing and a nobody. The anger I had inside about having polio would hit me full force repeatedly. It was only when I left the 2,000 member Disciples of Christ church that I had been a member of for over 10 years, and came to the little Community of Faith, that I found release and deliverance from the guilt and shame that had consumed my soul.

The doors of Community of Faith had been opened only a few months when I became a member. It was a small church of about 50-75 members. But it was a church that overflowed with love and acceptance.

I gave up on the dream of having someone in my life that would love me for me, other than my family. That is until the day I saw Rod’s handsome frame standing in the doorway of our small, rented, church building. Rod appeared extremely self-assured, with an awe-catching smile that spread across his smooth, dark, handsome face. He had coal black, wavy hair with just a tinge of gray and he stood a little over six feet. His smile and his dark brown eyes seemed to envelop me when he asked me my name that beautiful Sunday morning. He had just moved back to Memphis and his mother had invited him to come to church. Even before she introduced us, my heart had begun to race wildly. I did not know what was happening inside. I only knew that there was something different, something extraordinary about him.

Right away, Rod and I began seeing each other every chance we got. Arriving at a restaurant one evening, Rod reached out his hand to help me from the car. Just as he was grabbing my crutches, he spotted an old, rusty penny lying on the pavement. He carefully reached down to pick it up and placed it in his pocket. I let out a giggle and said, “Now why on earth would you be picking up an old penny?”

“Well, these little copper creatures appear everywhere. When I spot one, I always pick it up. I take ‘em home and put them in a jar. I’ve come to believe that God plants these pennies across my path to remind me that he loves me and that he is watching over me always.” He turned the penny over and over again in his hand as if he had indeed found a treasure. I smiled but really thought no more about it. I was too excited and nervous about being on a real date with such a fine, respectable man.

Surprisingly, I told him all about my past, including my abusive relationships and marriages. He listened intently and without judgment.

“Shelia, you have to let go of the past, sweetheart. Forget about failed relationships, past mistakes, wrong choices and all of that. Remember to put God first and everything will be alright.” He always spoke with such passion and strength. No wonder I had fallen in love with Rod.

He felt the same about me because after six months of dating he asked me to be his wife. By this time, I was picking up pennies myself. Rod was right; these little copper creatures, as he called them, just popped up at the most uncanny times in the strangest of places.

One evening, Rod’s was preparing to take his cousin home.

I waved good-bye to the two of them. Just as I turned to go back in the house, I spotted a shiny, new penny lying at the entrance of the door. I knew it had not been there before. Surely, I would have seen it. I reached down to pick it up and added it to the overflowing jar of pennies we already had.

Rod took his cousin home and said his good-byes. Just as he was getting ready to step into his car, four men came from a breezeway leading from the apartment. They attacked Rod viciously and then shot him. They stole his life for the few dollars he had in his pocket.

As grief and anger consumed me, I cannot remember when I first noticed the pennies. I just know the copper creatures began to make their appearance in the most unusual places and at the most unusual times. One morning when I woke up, there was a shiny new copper penny lying on my bedroom floor. They appeared at the grocery store, on the parking lot, at church, at work, at home, at restaurants, everywhere! I found myself picking them up and bringing them home, placing them in an old jar. Within my spirit, I began to hear Rod say once more,  “Shelia, God plants these pennies across my path to remind me that he loves me and that he is watching over me always.”

Since Rod’s death, literally thousands of pennies have crossed my path. Each time one appears, it reminds me of the great love we shared and I know now that love does transcend.

It has been several years since Rod’s death and I still long to have him with me. But just when loneliness hits me, just when the attacks of grief seem insurmountable, a penny, a copper creature appears, a penny from Heaven – and I know that everything will be all right. I know that Rod is with God and he is doing just fine.

God used the most tragic event I could ever experience, and through the devastation He opened new doors. Rod’s death was the catalyst for my writing. At the advice of one of the ministers at church, I started journaling to keep from completely ‘losing it’ after Rod’s murder. I always loved writing and reading, but I never imagined that by journaling I would rediscover my love for writing and reading. I am now a successful, published author of nine titles!

When I look back over the years, I never thought I would make it from that horrific day to this day. I never believed that the day would come where the hurt in my heart would be something I would learn to live with, and that God could ease that hurt through His grace and mercy.

I write today because God revealed my talents and gifts to me after going through a journey of grief that has led to doors opening for me, that I could never hope, think, or imagine.

Thank you, God for being truly omnipotent, omnipresent, and omniscient. I love you, Lord, and I thank you for loving me.”–God’s Amazing Girl, Shelia

Here’s the scoop on Sheila’s latest book, My Son’s Next Wife.

First Lady Audrey Graham is gone and her husband suffers from loneliness and the after-effects of his second stroke. Their son, Stiles, now minister of his father’s church, is engaged to Detria and has found happiness at last—despite his heartbreaking divorce from Rena. Rena’s now living in another state and has found a new love herself, Robert, though she resists his marriage proposals because she doesn’t feel she could ever be completely forgiven for her past sins. Things take a turn for the worse when Stiles’ father suffers another stroke and Detria has a miscarriage, and his faith is tested like never before. But who knows in whose arms he will land up in the page-turning conclusion to My Son’s Wife series!

For more about Sheila and her books, drop by

Thank you, Sheila, for your frank sharing of a painful tragedy. I know Rod is with God but losing someone we love is the hardest thing.

I think Sheila’s tag line “Perfect Stories about Imperfect People” is EXCELLENT. We all know that we are sinners saved by grace, but sometimes we forget that.

Have you ever noticed that people will judge someone for doing what is wrong but will then turn around and do the same or worse and never see their own sin? Why is that? —Lyn