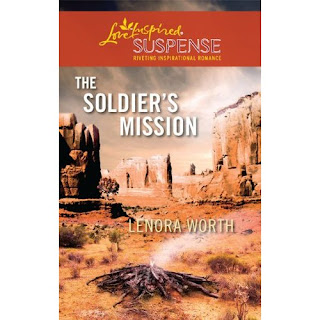 The first page today is From The Soldier’s Mission by Author Lenora Worth.

“She couldn’t get his voice out of her head.

Laura Walton thought about the man she’d come to the desert to find. The man everyone was worried about. The man who, a few weeks ago, had called the CHAIM hotline in the middle of the night.

“My father died in Vietnam,” the grainy, low voice said over the phone line. “My brother was wounded in Desert Storm. He’s in a wheelchair now. And I just got back from Afghanistan. Lost my whole unit. Lost everyone. I think I need to talk to somebody.”

Laura had been on call that night, volunteering to man the hotline that CHAIM held open for all of its operatives. But only one call had come to the Phoenix hotline on that still fall night. One call from a man who was suffering a tremendous amount of survivor’s guilt.

Laura understood this kind of guilt. She didn’t have survivor’s guilt, but her own guilt ate away at her just the same. She’d lost a patient recently. A young patient who’d taken his own life. She’d failed the teenager.

The soldier’s tormented words, spoken with such raw pain, had stayed with her long after the man had hung up.

Which he did, immediately after confessing that he needed to talk.”