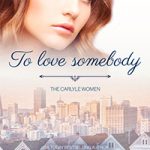 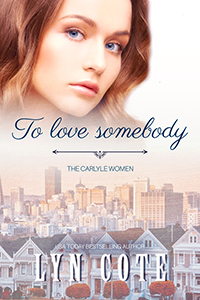 On Thursday November 1st, To Love Somebody will go live and the pre-order price of $2.99 will increase to $3.99. Here’s a taste of the story:

Through two horrific days and one long night, Leigh Sinclair had held it together. Until an hour after she hugged her little girl and watched a doctor give the child a sedative at the hospital and finally, thankfully, brought her here—home to her own bed. Then Leigh had fallen apart.

All her self-control dissolved in an instant, and she started shaking and couldn’t stop. Nate had led her from her sleeping child into the dark living room. He’d nudged her down onto her sofa. Murmuring, he’d sat down and laid her head against his shoulder. And slowly the trembling had ebbed.

Just a few weeks ago, Leigh had only known Nate Gallagher, NYPD detective, professionally. He’d made it clear she interested him, but she’d kept him at arm’s length as she did every other man. Then she’d needed him and he’d come through for her. Now he stroked her long hair with steady hands, giving her wordless comfort.

“It’s all my fault.” The words flowed out of Leigh’s mouth a second time. Through the crisis, she’d fought voicing this admission, knowing it wouldn’t help, knowing that guilt was natural and unavoidable. Yet all the while fearful that someone else—everyone else—would point accusing fingers at her.

Nate said nothing in reply, just continued stroking her hair.

In her weakness, she felt the latent strength in his large rough hands. “I’ve always carried so much guilt about Carly,” she whispered. “Not just now. But always.” And I always will.

Little Carly’s face glowed in Leigh’s mind. Grandma Chloe always said Leigh’s little girl got her looks from Leigh’s grandfather, who’d died in World War I. That was because Grandma Chloe had never seen Carly’s father. Carly was the spitting image of her father with his fair skin, black hair, and gray eyes.

But Carly had never seen her father, either.

This fact never stopped gnawing at Leigh. She knew it had created an invisible barrier between her and Carly. Every time she looked at her, her daughter’s sober little face—her silent little mouth, those somber eyes that hid every thought—haunted Leigh.

“Everything will be okay,” Nate said at last.

Leigh gazed up at him. His face was guarded by shadow, but the moonlight illuminated the warmth of his auburn hair. She couldn’t form words, her mouth paralyzed.

I’ve stood apart from my daughter since she was born. Secrets separate us. Secrets I can’t divulge. Will I never break through to her, connect with her heart-to-heart?

This series is all about family’s and the secrets that divide them. Does your family guard secrets?–Lyn

To pre-order at the reduced price, please click here.