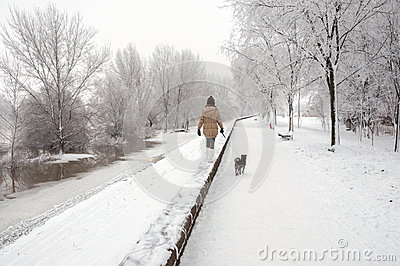 Valentine’s Day with a Twist

Sandy walked down the windblown road, letting her dog big mutt Mulligan pull her along. The blustery February wind matched her mood. This would be her second Valentine’s Day since she’d lost Jim. After years of marriage, they had almost stopped celebrating Valentine’s Day except for Jim’s cheery Valentine’s Day Good Morning! which had always included a mention of how much he loved her.

She blinked back tears, not wanting to give in to self-pity and get only chapped cheeks in return.

But then Mulligan began tugging at the leash yanking her off the road into the wooded area. She strained to prevent him but he was stronger and pulled her along. Then she spotted it, a jogging shoe protruding from behind a tree trunk. “Oh, my!” Then she was hurrying right beside Mulligan.

A man with silver hair lay on the jogging path, unconscious. Sandy whipped out her phone as Mulligan whined and sniffed around the man. A quick few words to 911 and help was on its way.

Mulligan was licking the man’s face.

A moan sounded. “What happened?” a gruff voice asked.

“I certainly did,” Sandy snapped. “You were unconscious. You might have a concussion. Or have suffered a heart attack. How did I know?”

The man’s eyes widened and then his expression lifted, almost into a grin. “Well…you’re right of course.”  He looked around. “I think I tripped.”

Sandy motioned toward a protruding tree root from an ancient oak tree by the path.

“That would do it all right. My ankle.” He gestured toward it. “I might have twisted it. And by the way I’m Hal.” He offered his hand

She shook his cold hand and introduced herself only as Sandy. The sound of a siren sounded in the distance.

“I feel like a fool,” he said, lifting himself to rest on his elbows.

“Men,” Sandy said good naturedly as she stepped away so she could be seen from the road. “Even a super hero can trip.”

The man grinned.  “And how many superheroes have you come to help?”

Sandy chuckled at this.

The EMT’s hurried up and swarmed around them. They determined that Hal had an injured ankle and needed an X-Ray to rule out a break and a doctor should make a call about a concussion. Soon he was being slid into the back of the ambulance.

“Wait!” Hal called out. “What’s your last name? I want to be able to thank you properly!”

“There’s no need,” Sandy called back from the curb.

“It’s too cold and I might have a broken ankle, I can’t hang around and wait for you to walk your dog by here again.”

Sandy drew in breath at the way Hal was looking at her. “My last name’s Warner. You’ll find me under my late husband’s name Jim.”

The door was shut and the ambulance took off with the whine of its siren. Mulligan whoofed after it. Sandy couldn’t move, the thrill of having a man ask for her full name freezing her in place. Mulligan dragged her into starting their walk again.

Had Hal just been being polite? Only time would tell. But she couldn’t stop herself from grinning.

QUESTION: Do you think that romance is only for the twenty-somethings? Yes or No?–Lyn