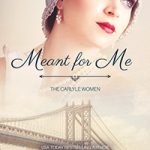 History class often left out the “stuff” I find fascinating. How did events affect the people living then? History is just the story of life. I always end every historical with a Historical Note that tells the reader what was true history and what I made up within the real history. Here’s the one from my new book, Chloe’s story, Meant for Me.

“Wars are the locomotives of history” is a truth that can’t be denied. Wars force humans to make advancements in weaponry and medical technology. And they put the fighting-age generation through a fiery furnace that forever changes them and, hence, their society. To me, the twentieth century started with WWI and not the arbitrary date of 1900. A living example, Chloe led a completely different life before WWI than she did after it.

Also, two new amendments to the Constitution at the beginning of the twenties—women’s suffrage and prohibition–ushered in vast societal changes. Women started voting—a good thing. But the prohibition amendment actually had the opposite effect on society than it was supposed to—it closed the male domain of the old-time saloon, but the nightclub took its place and made cocktails popular for women as well as men. The generation that had been told they were fighting in the “War to End All Wars” returned from that first brutal modern conflict—with air battles, mustard gas, machine guns, and tanks—disillusioned and ready to drown their sorrows in bathtub gin. So criminals organized and reaped huge profits from speakeasies while the FBI grew stronger, trying to stop the illicit trade.

The “Lost Generation” of the twenties took nothing seriously if it could help it and flaunted its new freedom with bobbed hair, rouged lips, short skirts, and automobiles. For the first time, the name of Freud and the word sex worked its way into modern conversation. Couples stopped courting and started dating —shocking their elders by kissing people they had no intention of marrying. They danced the wild Charleston and the Black Bottom to honky-tonk jazz. Chloe, Roarke, Kitty, and Drake all portrayed the different ways Americans coped with this new age.

Finally, WWI was the first war in which American black men were drafted in larger numbers as citizen soldiers. Both the South and North were rocked by racial unrest when black men donned uniforms and shed a servile manner. Of course, Minnie portrayed the hope of the disenfranchised black population. She was born into poverty and Jim Crow, but Minnie had dreams and the will to make them come true. Go, Minnie! In the new century, Chloe and Minnie found a way to break through the barriers that had separated their families for generations and Chloe found her greatest joy in seeing her friend’s success.

In the subsequent stories in The Carlyle Women series, these many themes—tyranny, injustice, freedom, equality—will repeat, since they were the great struggles of the twentieth century and continue today. Just check the evening news.–Lynz

To read the first three chapters of Meant for Me, Book 1 of “The Carlyle Women,” click here. 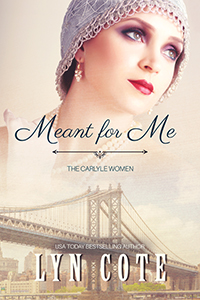