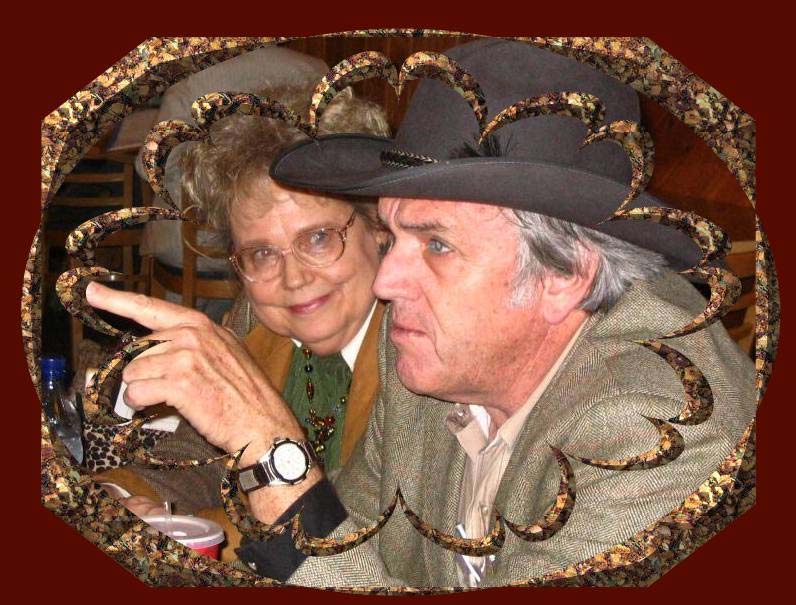 My guest today is Janet Chester Bly, the wife of late Western author Stephen Bly. She is offering a BOOK GIVEAWAY TO A COMMENTER. I love the photo of the two of them above since it shows Janet’s love for her husband shining through–also her sweet-nature. Janet is going to tell us about

Narcissa Kinney, Sponsor Of “The Most American Thing in America.” Here’s Janet:

“Stuart Brannon’s Final Shot is full of adventure and humor and most of it happens in or near Gearhart, Oregon in 1905.

The railroad opened up more tourists for the seacoast village of Gearhart, tucked between crashing surf and Pacific forests. Narcissa Kinney insisted that the city council proclaim this a ‘dry town,’ which it remained for more than seventy years after her death.

I was intrigued in my research with the Chautauqua movement of the times and Narcissa’s sponsorship that brought culture to Gearhart. She organized the forming of 200-acres of prime forest land set aside for Gearhart Park, that included an auditorium with arched entrance, belfry, double hip roof and clerestorey, used for traveling circuit speakers and entertainment. She made sure the development scheme protected the Ridge Path, a principal byway grande promenade through the area’s dune meadows, as well as many other natural features as possible.

Because of Narcissa, Gearhart became the first planned coastal resort community in the state of Oregon.

Gearhart residents and visitors enjoyed classic plays, Broadway hits, opera stars, glee clubs and bands such as John Philip Sousa’s. Fiery orators and activists, crusaders and preachers took advantage of this forum. More than four hundred other cities across the country sponsored these same events. President Theodore Roosevelt called them, “the most American thing in America.” This movement thrived in the day before movie theatres and TVs. 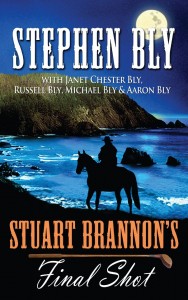 Narcissa is the background real-life character important to the setting of Stuart Brannon’s Final Shot. She inspires the fictional Lady Harriet Reed-Fletcher to sponsor her own benevolence project in the city of Gearhart. Lady Harriet and Narcissa compare in strong will, leadership and influencing the men in their lives to get involved in their causes.

Gearhart is where Stuart Brannon and his friends solve the mystery of finding his U.S. Marshal friend and the ‘whodunnit’ of several murders.

Not what Narcissa had in mind at all for Gearhart, I’m sure. But her husband, Marshall, founder of the local golf course, would approve the celebrity tournament Lady Harriet instigates and in which Brannon participates. And Narcissa would be pleased with the mission: raising money for the Willamette Orphan Farm.”–Janet

BIO:  Janet Chester Bly has authored 30 nonfiction and fiction books, 18 she co-authored with Christy Award winning author, Stephen Bly. Titles include The Hidden West Series, The Carson City Chronicles, Hope Lives Here, and The Heart of a Runaway. She resides at 4200 ft. elev. on the Idaho Nez Perce Indian Reservation. Her 3 married sons, Russell, Michael and Aaron, live down the mountain with their families.

“Stuart Brannon’s Final Shot delivers and reminds us what we’ll miss most about the beloved author.” Jerry B. Jenkins, NYT Bestselling novelist & biographer

“Bly throws his readers into the fray from the first page and never lets up….” Award-winning author Kathleen Y’Barbo

Michael Ehret, CWG editor-in-chief: “…unusual experience… I found it a fascinating look into the process (of the writing of Stuart Brannon’s Final Shot).”

I love when authors visit and tell me about strong women  like Narcissa Kennedy I’ve never heard of. WOW-Just think of a woman who had a vision of the future and wouldn’t let men talk her down. 1905 is 15 years before women won the right to vote and Miss Kennedy left a lasting treasure for the people of her town.

Janet is offering a copy of this book to a commenter. Here’s the question:

Question: What do you suppose some of the things people –male and female–said to her idea of how the town should prepare for the future. Can you hear the nay-sayers? Go ahead and post what they might have said to her.–Lyn