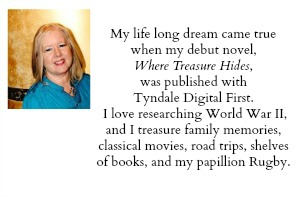 My guest today Johnnie A Donley is celebrating her first book. Where Treasure Hides, which is strictly digital. I had the pleasure of helping Johnnie after she won the ACFW Genesis Contest last year by giving her some tips. Now she’s going to give away an ebook copy so here’s what Johnnie has to say:

“My maternal grandmother died a few days after my birth, but I’ve heard the stories of how she, a widow, singlehandedly raised her children.

During World War II, a Blue Star Flag hung in her living room window, a service flag with six blue stars – one for each of her six sons.

As this hardworking woman waited for her sons to return home from both the European and Pacific theaters, she welcomed other mothers’ sons into her kitchen for a home-cooked meal. One young soldier, nicknamed Tex and stationed in Michigan couldn’t make it home to the Lone Star State for Christmas so he spent the holidays with my grandmother and her daughters.

While the war raged, my uncle’s wife waited for his return. During those difficult years, she bought the home that they lived in until their deaths decades later.

While the war raged, my aunt waited for her husband’s return. During those hard years, she worked at a grocery store and volunteered for the USO.

And they all waited. 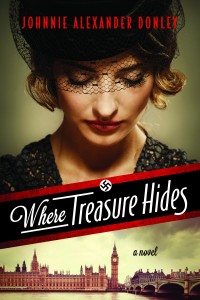 When war comes to her home in Rotterdam, Holland, my protagonist Alison Schuyler joins the Dutch Underground to protect her country’s art and children.

But eventually Alison is forced to flee Holland and later finds herself in an isolated Bavarian chalet. Where she waits.

During the long months of Alison’s separation from her family, she must find a reason to wholeheartedly embrace the truth of Proverbs 31:25. The verse says: Strength and honour are her clothing; and she rejoices in the days to come (KJV).

We so often think of waiting as a passive, do-nothing time.

But waiting can require the deepest strength of all – the strength that comes from total trust in God during an uncertain time.

During the war years, my grandmother couldn’t know that her sons would make it home, marry, and raise families of their own. My uncle’s wife and my aunt couldn’t know that their husbands would come back to them, or that one day both couples would celebrate golden anniversaries with children and grandchildren.

But those were the futures God had granted them . . . reasons for rejoicing in the days to come.

Our futures lay ahead of us. We may be swamped with to-dos; we may be waiting; we may be doing both. But the truth remains. When we clothe ourselves with strength and honor, we can rejoice in the eternal days to come.

To be entered in the drawing, please leave a comment. Here’s the question: Have you ever had to wait for something? Was it worth the wait?–Lyn